Satyr Iasis has kept a deep and mystic atmosphere in his Music as a favourite path. The musical aim of Satyr Iasis is to connect 21st century mentality with our common archaic roots and thus explore new uncharted territories through music. 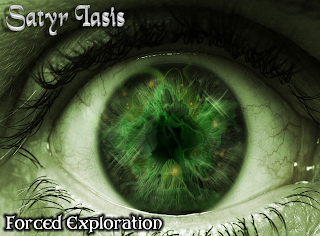 ABOUT THE RELEASE:
Exploration comes from curiosity. Curiosity is one of the greatest forces of human beings and has given motivation to further learning and experience through our evolution.
Humanity has been through numerous places in space-time and spirituality, some more inaccessible than others. Some of this Space / Time seemed unapproachable but we managed to pass-through them.
There are times in the journey that may stack in a swamp, in a jungle, or in a desert and when someone needs a boost, this comes from curiosity.
We have the curiosity to see what lies after the swamp or if next to the jungle, we can find a meadow if there is an oasis in the middle of the desert and what lies behind the veil…
This is the story of an exploration.
A Forced Exploration


ABOUT THE ARTIST:
Satyr Iasis is Dimitris Zindros from Greece.
Dimitris started listening to psytrance at the age of 15 and got more involved two years later when he finished studying music technology in 2008.
By that time Satyr Iasis began composing sounds with synthesizers and experimenting ways to express his musical ideas and showing by playing in a couple of private parties.
Since then Satyr Iasis has to keep the deep and mystic atmosphere in his Music as the favourite path. The musical aim of Satyr Iasis is to connect 21st-century mentality with our common archaic roots and thus explore new uncharted territories through sound.
In the Summer of 2012 Satyr Iasis publish his first track in "V.A - Hyakki Yakoh" on "lonelyplanet Records" followed by "V.A - Psychedelic Forms Vol.1" and "V.A - Forgotten Dark Civilization" on Psymoon Records.
This time Satyr Iasis give a step foreword by join Lua Records and publish his first solo debut EP named "Forced Exploration"
The Sound of Satyr Iasis keeps evolving.