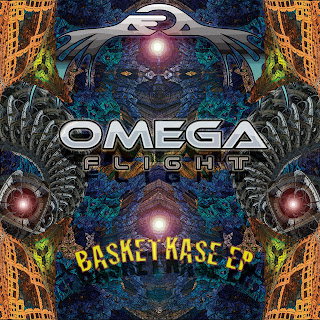 About the Artist:
Omega Flight AKA (Derren) has been Djing and Producing electronic music for more than 10 years.
Derren Grew up listening to techno, later in 2004 he found Psytrance and loved the melodies and vibe of the nights.  Omega Flight likes to call his style of music"twilight psytrance" and his influences are based on the many UK and South African artists.
Omega Flight has been playing all around the UK significantly in some Festivals and the party's as: Tribe of Frog, Toadstool, Psyanide, Bassinvaders, Tesla Project, Arti-fact and more...

After some participation in other compilations from Lua Records and; Distant Tremor, Omega Flight is now publishing his official debut on Lua Records entitled "Basketkase EP"  Derren not only performs live shows all around the UK but in the last 4 years he has been creating magical string art and stretch installations at parties and festivals alike as "Ink Junkie" visually melting peoples minds & perceptions.

About the Release:
Basketkase EP describes the free spirit of the artist and it is the Official debut release of Omega Flight on Lua Records.  This EP is counting with the participation of some known psy trance artists as: Xatrix, Twisted Reality and Perfect Pause.  The release has been mastered @ The Stoodio (Bristol) by Colin Bennun Oood.

Omega Flight's music encapsulates the floatiness sometime ethereal quality of psytrance with funky groove is ridden vibes of techno to create a hip wiggling head-nodding time.
Some people call it Full on, some people call it Psy Trance, the artists call it twilight psytrance...
Most people just don't stop to dance to Omega Flight music !!
Omega invites you to Flight into a Basketkase full of good tracks.
Enjoy!